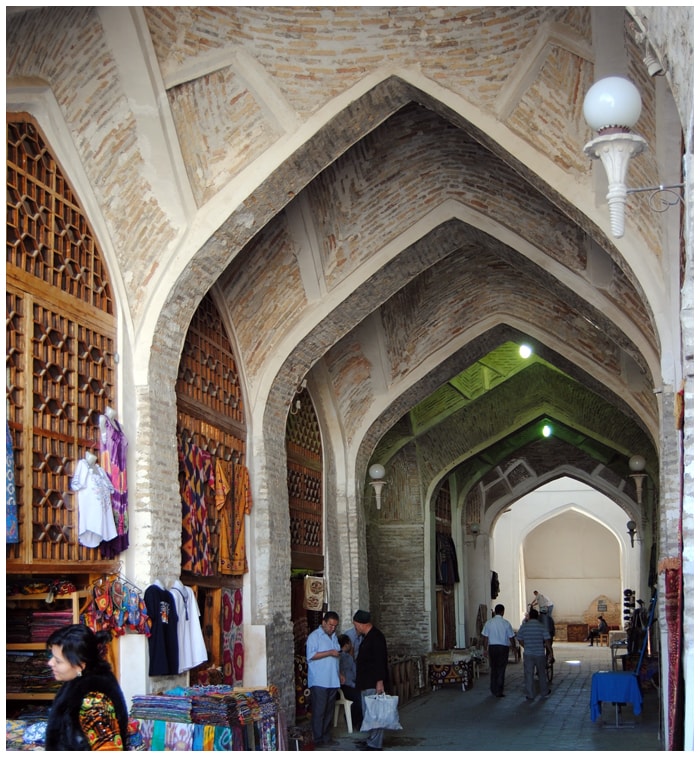 Day 1: Tashkent
Welcome to Uzbekistan. On arrival, the guide will meet you and transfer to the city. Today you will have a city tour and visit Independence square which is defined to be a symbol of victory over fascism in World War II. We will walk along the local Broadway as well as see the famous Tashkent metro, originated in 1977. In the afternoon we will visit Chorsu Bazaar, Kukaldash Madrasah and Hast Imam complex that contains of several madrasahs, mosques and mausoleum. This tour will be continued visiitng Othman Quran. It is world's oldest Quran copy (8th century). Quran belonged to Othman Ibn Affan, the Third Caliph who was the four virtuous Caliphs who flourished the prophet Muhammad. Othman was killed by strangers in the 8th century. Night is in a hotel.

Day 2: Tashkent - Bukhara
Today you will have a flight to Bukhara. On arrival, you will have a city tour and visit the most ancient citadel in Bukhara found in the 4th century named Citadel Ark which helped as a palace for several dynasties of Bukhara Empire. This tour will be continued seeing Samanids mausoleum, a real masterwork of architecture of 9th -10th century. Later on we will drive to Chashma Ayub, meaning Job's well and Bolo Hauz mosque, famous for the mosque of forty columns built in honor of Bukhara governor Abu Fayud Khan. This tour will be continued walking by shopping domes and visit one of the most famous madrasahs of Bukhara called Nodir Divan Begi (Lyabi House Ensemble). Then visit Poi Kalon complex. It has three structures built in the 12th - 16th centuries: Kalon minaret, Kalon mosque and Mir Arab Madrasah. Rest is in a hotel.

Day 3: Bukhara
Today is the city tour of Bukhara. We will visit Bahauddin Naqshbandi complex, situated few kilometers from Bukhara. It is a commemorative complex of famous Sufi Leader and Philosopher, one of the Muslim pilgrimage places for all people of Islamic world. Sheikh Bakhauddin Nakshbandi was one of the divine masters of Amir Timur. Currently complex contains of mosques of Kushbegi and Muzafarohana, courtyard with pool, madrasah, and burial vault of Bukhara rulers and Dakhma on the tomb of Saint Bakhauddin Nakshbandi. We will drive to the countryside residence of Bukhara Emirs called Sitorai Mohi Hosa complex. The palace is the sample of combination of numerous architectural styles. Emir called the palace on behalf of his wife who died young "Star - like and moon- like Palace". We will drive to Sumiton village to find Chor Bakr memorial complex, the town of the dead. Complex represents the four sides of the earth and takes that all people are equal. Construction of the complex started during the Samanids reign until the 16th century. Afterwards we will return to city. Night is in a hotel.

Day 4: Bukhara - Samarkand
In the morning is train to Samarkand. Samarkand is located in the valley of the river Zerafshan. It is the second largest city of Uzbekistan as Babylon or Rome. You will have the city tour and visit Registan square, Shakhi Zindeh, Mausoleum Guri Emir and Bibi Khanum Mosque. Registan Square is a complex of three beautiful Madrasahs found in the 15-17th centuries. Shakhi Zindeh signifies a rich assortment of mausoleums of the 11th-15 centuries. It is a part of the UNESCO World Heritage Site. Bibi Khanum Mosque is dedicated to the beloved Tamerlane's wife, after his fruitful tour in India. Transfer to a hotel for rest.

Day 5: Samarkand - Tashkent
Today you will continue opening Samarkand city. Here you will have a chance to visit Ulughbek observatory, built in 15th century by Ulughbek. It is one of the most famous Samarkand rulers and scientists. In general, Ulughbek created in 1437 the "Zidji Guragoni" set, which had information about 1018 celestial bodies, but killed by order of his own son. Then we will walk along the local Broadway enclosed by souvenir shops, teahouses, sweets and workshops. Visit the national bazaar Siab and find Uzbek traditional handmade products and local sweets. In the afternoon is transfer to Tashkent by train. Night is in a hotel.

Day 6: Tashkent - Chimgan Mountains - Tashkent
In the morning you will travel to Chimgan Mountains. On arrival you will have a chair lift to reach the top to see Beldersay peak 30 min one-way. Travelers will have some free time to enjoy outstanding nature and capture unforgettable moments. On the way back you will stop over at Charvak lakeside and see beach where you can have water activities (as per season). Charvak is an artificial lake. It is very a popular resort in Tashkent region. In the end of the day is way back to Tashkent. Overnight is in a hotel.

Day 7: Tashkent - Flight
Flight for the next destination.

Flight Tashkent-Bukhara - from 60 $ per person

Service does not include:
- Visa
- Full board
- Travel insurance
- English speaking guide
- Entrances to all museums